As shared in a prior post, Kai Staats and Nathan Schmit were successful in cutting free one of the original pressure doors from the basement of Biosphere 2. This door had not been used for some twenty years and is a perfect fit for SAM, where it will serve as an emergency exit from the Crew Quarters space and provide a small but vital natural lighting portal.

It was the original intent to retain nearly the full steel plate into which the door was mounted such that it would fit neatly into the opening of the 40 foot shipping container without additional framing. However, upon inspection prior to cutting, Nathan and Kai discovered that that heavy 1/8″ thick sheet was heavily warped and would have been very difficult to weld without a great deal of bending and fill. Therefore a small frame was cut around the door. While the total mass was reduced to ~150kg (330lbs), some rigging and planning was required to safely maneuver the door into position in its new frame.

As with the end of the 20 foot container, the original doors were removed and 1″x3″ steel tubing was installed as frame and studs. The tubing is bolted to the thick steel frame of the shipping container, with temporary brackets holding the studs until welded. Nathan welded the studs to the frame, then the door, and finally the 12g sheet metal which forms an air-tight seem around the entire frame and to the door.

During the SIMOC-SAM Team Summit the first full SAM pressure test was conducted with the 40 foot container end in place. While the welds themselves held strong, leaks between the layers of the original floor were detected and then mitigated over the subsequent three days, before the holiday break. 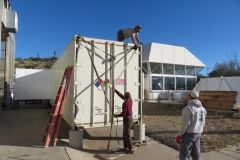 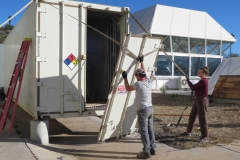 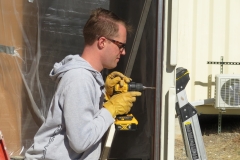 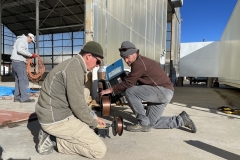 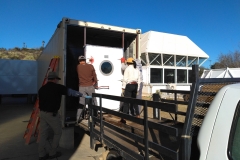 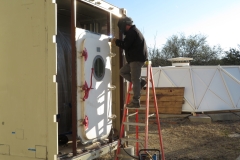 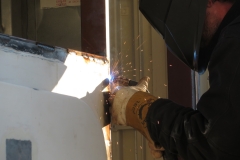