A Container Home on Mars

A Container Home on Mars

At 81″ x 89″ the size of the plate dictated two 1/4″ thick sheets welded along a seam or a single sheet of 3/16″ which is considerably heavier. We opted for the later, and discovered just how hard it is to manipulate that much steel. With the Test Module plate no two holes were equally spaced and yet, with careful measurements we were able to get the bottom and top rows of holes perfectly set without any adjustments. With this new plate the threaded inserts were factory set and we applied the same careful measurements, double checking with even the diagonals less than an eight of an inch over 100.

We drilled an 1/8th inch pilot, then 1/4″, 3/8″, 1/2″, and a few 5/8″ before the bit grew dull and jammed the drill one too many times. Our attempt at sharpening the bit produced a sharp edge, but it dulled too quickly, a typical artifact of sharpened bits used against metal. The attempt to go straight to the final 3/4″ bit was fatal, destroying the transmission in the battery powered drill and then nearly breaking Kai’s wrist with a more powerful corded unit. Clearly, we were not applying the correct tool for the job.

We took the ~500lbs plate to the B2 machine shop and used the stable drill press on the slowest speed. With a new titanium bit and ample cutting oil Kai and Colleen were able to complete all 30 3/4″ holes in less than four hours. However, despite precise measurements the holes were not all aligned. Using a car jack and 2×4 we shifted the plate to align the greatest number of holes possible, and then hand ground the remaining holes into an oblong shape such that the bolts would all enter by hand, without the use of a wrench. This assured no cross-threading and in the end, a solid fit.

This is a clear example of the old adage, “Perfect is the enemy of good enough” for had we simply used the 3/4″ sloppy hole saw (which we tested on the first hole), nearly all of the bolts would have fit on the first go, saving two days extra labor. It remain unclear how the measurements were ill fit, but may be a combination of too many stages of bits compounded by the threaded inserts in the container frame not being perpendicular to the face and set back 1/2″ each, causing the bolts to enter at an obscure angle. 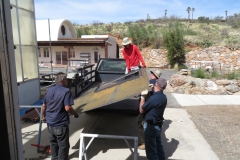 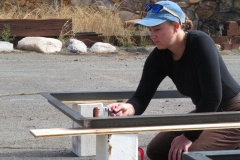 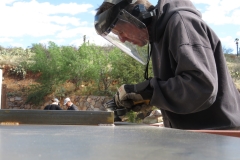 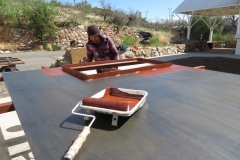 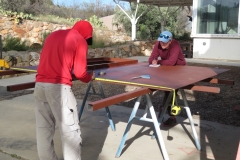 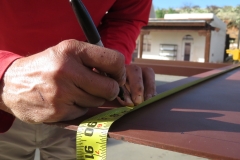 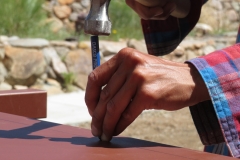 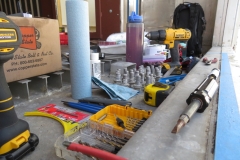 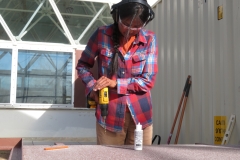 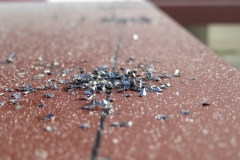 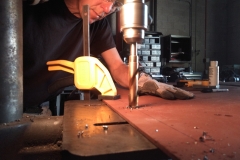 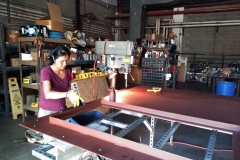 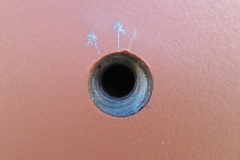 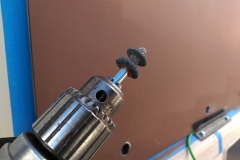 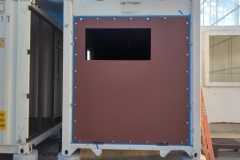 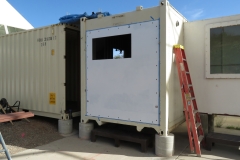