Home/Construction/Through the roof!
Previous Next

While the Biosphere 2 was being built, a series of on-campus greenhouse structures, quarantine facilities, and insect farms were used to harbor the plants and animals collected from around the world. While in operation, some of these structures served as a botanical garden, a place for visitors to experience something similar to the Biosphere without being sealed inside. Last summer we removed five greenhouse structures to make way for the SAM outdoor Mars yard. Between this space and the Test Module remains a 6400 square foot greenhouse (that has seen better days). It is our intent to renovate this building, to become the SAM indoor Mars yard and terrain park. But first, we must replace the dilapidated plastic panels with a new, corrugated steel roof. This will serve the purpose of both protecting the Mars yard from the weather and minimizing the direct light and reducing the temperature in the warmer months.

This week saw Terry, Kai and Colleen engrossed from sunrise to sunset high above the concrete in a 45 foot cherry picker (a.k.a. “snorkel” or lift). While exciting to be 7-10 meters up, suspended on an incredibly powerful and precise articulated arm with six degrees of movement, it was an five exhausting days. The fumes of the diesel electric generator (which drives the hydraulic pump), the constant hum of the combustion engine and unceasing BEEP! with every motion of the vehicle up, down, left or right was tiring. The body’s adjustment to the constant motion of the bucket, as though standing on the deck of a sailing ship was enough to invoke a sense of unsteady legs and uneasy sleep when back on terra firma, as though returning from an ocean voyage and weeks at sea.

The panels were most often brittle and fractured, yet they remained resistant to this final effort to bring them down to a final resting place. With full body harnesses and tethers, helmets and gloves we pushed, punched, hammered, and sawed our way from one end of the greenhouse to the other a half dozen times to reach every corner. For Monday and half of Tuesday we moved along the outside north and south edges, reaching in to remove several rows of self-tapping screws from the plastic, aluminum, and steel interface. Wednesday through Friday we carefully navigated the lift through the interior of the building, ever so slowly rising, twisting, reaching through small corridors in the overhead frame, cables, and supports until the unnecessary debris and structure could be cut free.

Driving the lift became second-nature. Driving the wheels from nearly full extension was a testament to the design quality of the Genie. 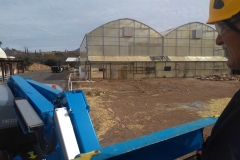 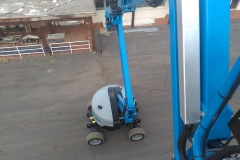 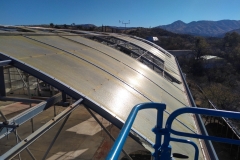 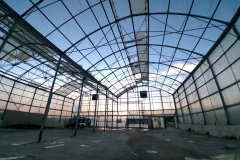