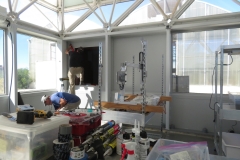 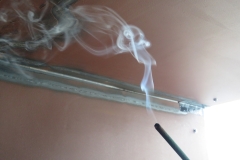 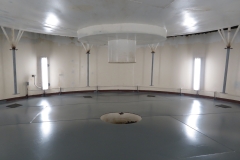 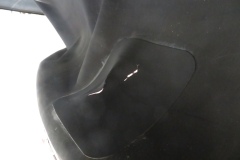 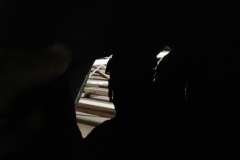 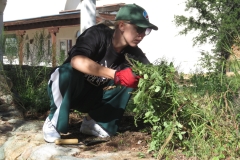 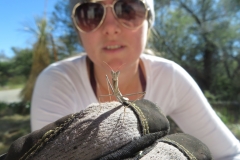 With our second full week back at SAM we remain focused on sealing and pressure testing, with some landscaping of the desert immediately surrounding SAM after a summer of intense rain and immense growth. We welcome Ezio Melotti, lead developer of the SIMOC project, and the return of Anastasia Stepanova, former engineer for the SIRIUS analog in Moscow, now PhD student at the Colorado School of Mines and SAM team member.

In preparation for this third pressure test of the expanded SAM vessel, we applied a proper fill of Dow-Corning 795 silicone in the window channels, providing the needed wider, deeper seal. We activated the lung blower in the SAM Air Intake Room (AIR) and as with the prior test the lung rose and the pressure increased.

Using the technique described by William Dempster and Linda Leigh, we lit incense and moved slowly through SAM, module to module, interface to interface and sure enough! —we were able to visually confirm the leaks we could hear, and discover a few more too.

Through this test run it became clear that the plates that cover the end of the 20′ shipping container will need to be welded for the complex assembly of steel stud framing was not something we could satisfy with 795 alone, especially if we desired to apply something more than a finger bead to those critical areas.

Before deflating the lung, Ezio notified Kai (via radio) of a previously unnoticed hissing sound. Kai entered the lung from the TM (through the tunnel) and discovered that roughly half of the patches applied to the holes in the original membrane were compromised—dried and cracked in just a little more than a year. This was completely unexpected, but perhaps a known function of siliconized rubber that was overlooked. Kai, John, and Luna have subsequently, carefully removed the old patches with new EPDM material (similar to the original membrane) on its way to Biosphere 2.

What’s truly incredible is that the lung rose at all given the number of holes in the membrane in addition to the known leaks in the TM, 20′ and 40′ shipping container. This gives us great confidence in our ability to maintain pressure for long periods of time, days, possibly weeks once all leaks are properly managed.

The UA welders will arrive on Tuesday to complete seals of two more interfaces, and then we’ll be back in the running for another pressure test and continued construction. Stay tuned!