This week brought welcomed, cooler temperature, rain, and hail. The desert was alive again after a much needed storm to break the dry spell. And with that invocation of precipitation came a highly productive few days, the start of our last, long dash to the finish line in May, and first pressure tests.

Trent and Kai removed the steel frame of the original data collection terminal and kiosk. From 1987-1989 this structure served as a station for monitoring, collecting, and displaying real-time data feeds from the analog sensors in the Test Module. Data feeds were brought from within the sealed Test Module to the kiosk through flex conduit, a junction box, and PVC pipe to the kiosk, with pressure fittings and silicone rubber used to maintain air-tight fittings.

Now, with most sensors transmitting via a digital communication medium, a single USB, Ethernet, or wireless feed can route all the data generated by the Test Module. As such, the entire kiosk will be replaced by a single, simple podium where a SAM manager, visiting researcher, or tourist engaged in a presentation can view data via a laptop.

While a dozen PVC conduits were terminated, filled with expansion foam, and buried in concrete, two conduits are retained: one for electrical power, the other for Ethernet and USB. Why? A hard line provides IT support on the outside of the habitat to provide direct support and potential firmware upgrades for equipment that misbehaving. While not desired and certainly not engaged regularly, this direct support does not require a break in the seal and simulation.

At the same time, Kai and Trent were eager to remove the last of the old, long-since abandoned and very much displeasing pipes and junction box from the space between the exterior and interior doors. The steel floor was cut free, pipes cut low, and concrete poured for a new, clean, elegant entrance. Next, the walls of this small space will be sanded, primed, and painted with the installation of the new, primary electrical panel.

Thank you Tim and Terry for helping with a six bag concrete mix, pour, and finish! 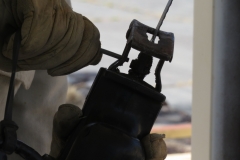 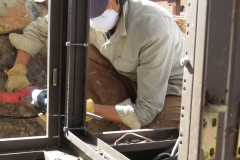 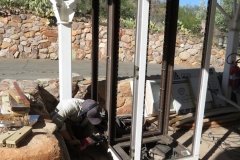 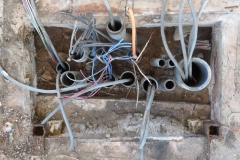 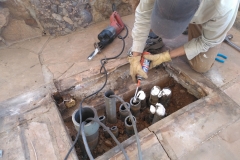 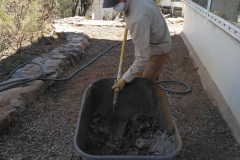 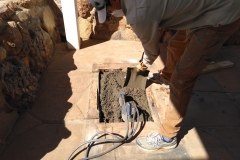 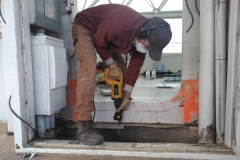 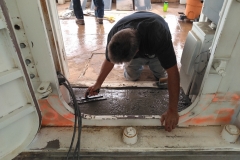 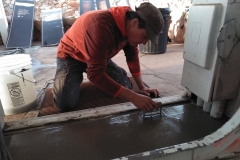